I’ve taken far fewer images this year compared to usual, and so recently I’ve been dipping into the archives for images to post. Sometimes an image just comes to mind, or I glance back and spot images that I meant to process. On other occasions the decision is made for me by external events. The topic for the WordPress weekly challenge this week is ‘On the Way’, and an image came to mind. I always regard a journey as an opportunity for images and a camera is usually easily accessible if not physically in my hand when I travel, and those of you who follow my blog will have seen some of the images I’ve taken ‘en route’.

I was travelling back up to London from Margate last Autumn and spotted a man on a platform (can’t remember where) and grabbed a shot with my Compact (Canon G10). The original was frankly rubbish, and I’m not going to show it to you in the body of this Post, because it’s so poor and if it was shown as the headline image for this post in the WordPress reader then this post would never get a second glance, but you can view it by clicking here so that you can see the starting point. I don’t know why it didn’t go to the Trash bin straight away. But clearly I saw something to work on because three days after it was shot I produced this image:- 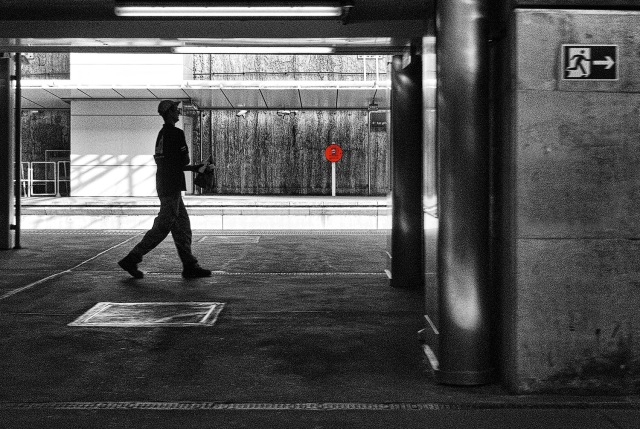 It has sat on the hard drive ever since and I’ve looked at it periodically. It’s an image that I like, but don’t really like. It’s an image that is a victim of the G10’s wake-up delay. That fraction of a second’s delay between me pressing the shutter and the camera deciding to play ball was enough for the man’s nose to ‘encounter’ something dark on the wall behind him, and worse – what he was carrying in his hand (a drink and a bag containing his lunch) was lost in the darkness of the wall completely. And that was the problem. A so-nearly-good shot lost. Or was it lost…?

It was raining last Sunday and I took a look at this again and thought: maybe I can move the man. An hour later I had successfully moved the man, plus his drink, but his lunch bag disappeared in the process, deliberately.

Click on either image to see a larger and sharper image

My wife doesn’t think this is an improvement, and gives as her reasons: the man has a slightly odd posture anyway, and the arm holding his lunch looks awkward and was conveniently less obvious in the original (thanks to the dark wall). I agree about the arm – it is awkward. His right arm is I think folded across his chest and his left arm holds his lunch and drink. The arm doesn’t look natural and once you’ve noticed that, it tends to be the one aspect that your eye keeps going back to.

The question is: was the image really worth an hour’s work? Was the image worth rescuing? Has it been improved?

So, it’s over to you: what do you think? Do post a comment, and let’s see what the verdict is.

Hi - I'm a UK-based photographer who started out 45+ years ago as a lover of landscapes, inspired by my love of outdoor pursuits: skiing, walking and climbing. Now retired, I seldom leave home without a camera and I find images in unexpected places and from different genres. I work on the premise that Photography is Art and that creativity is dependent on the cultivation of 'A Seeing Eye'.
View all posts by LensScaper →
This entry was posted in Black & White, Weekly WordPress challenge and tagged Photography, Street Photography. Bookmark the permalink.

17 Responses to A Questionable Move