Earlier this week I posted a minimalist Seascape (click here) taken in Littlehampton, a seaside town in West Sussex on the south coast of England. There has been a human settlement here since Roman times. For centuries Littlehampton was a fishing port, it wasn’t until the eighteenth century that it developed into a holiday destination and economic success followed with a Ferry to Honfleur in Northern France. Now the Port is principally used by pleasure craft.

We went to Littlehampton for one simple reason: to see the East Beach Café. At face value that might sound like a very strange reason for going to a place – to see a café. You’re probably thinking: must be a pretty special café. And you would be right. It is indeed special – a unique structure. 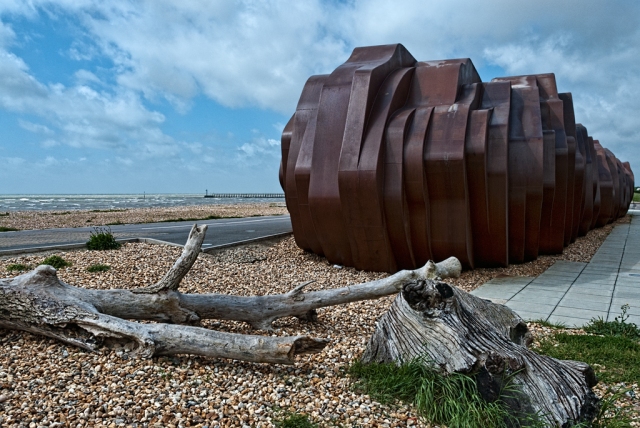 It was designed by Thomas Heatherwick, an award–winning designer who founded the Heatherwick Studio. The studio is perhaps most famous in the UK for the design of the London Olympic Cauldron for the 2012 Games, but its projects span the globe. The East Beach Café was built in 2007.

The building is a fully welded structure, with a rough, weathered appearance. Think of it as a striking piece of driftwood or flotsam washed up on the shore.

It sits in an isolated spot on the East beach and its appearance, from any viewpoint, is striking. Set apart from it a little further up the beach is an array of Beach Huts. Thankfully they do not intrude on the space that the Café justifiably requires to show itself off to full advantage. 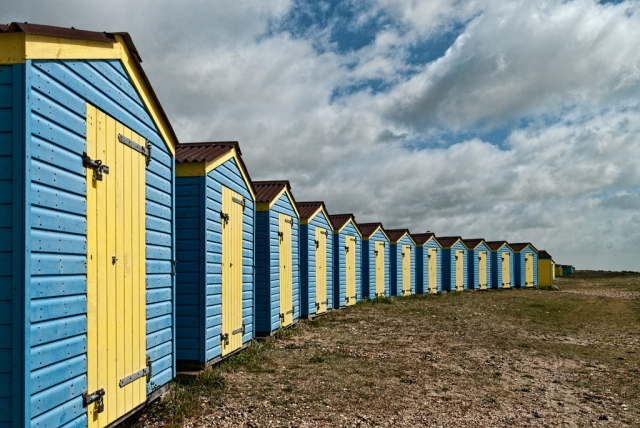 Importantly, it is not just the exterior that is to be admired. East beach Café is far from being a basic café. It serves excellent award-winning food. It’s well worth the visit – we had an excellent lunch here.

Check out East beach Café’s website for further information on the Building and also to see the Menus.

The images in the gallery that follows were taken on two different days (it’s easy to see the difference). An overcast day on which the seascape, previously mentioned was taken. And another sunnier day. Of all the images my personal favourite is the very last image in the gallery below. Actually the B&W conversion was only completed earlier this week. I’ve included the original colour shot as well for a comparison.

Hi - I'm a UK-based photographer who started out 45+ years ago as a lover of landscapes, inspired by my love of outdoor pursuits: skiing, walking and climbing. Now retired, I seldom leave home without a camera and I find images in unexpected places and from different genres. I work on the premise that Photography is Art and that creativity is dependent on the cultivation of 'A Seeing Eye'.
View all posts by LensScaper →
This entry was posted in Architecture & Buildings and tagged East Beach Cafe, Heatherwick Studio, Littlehampton, Photography, Thomas Heatherwick. Bookmark the permalink.