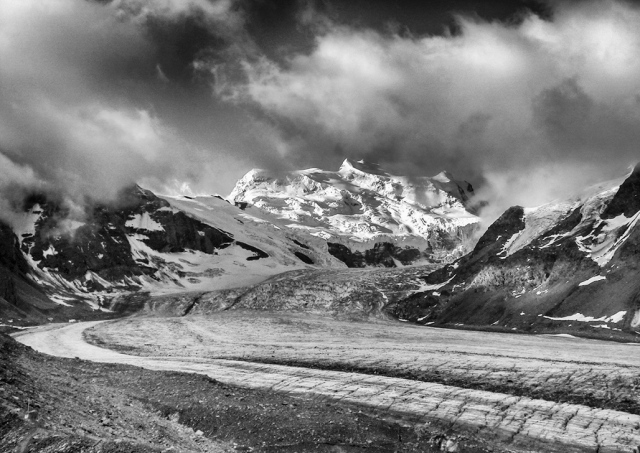 The Grand Combin seen from the edge of the Corbassiere Glacier

Today’s image was taken from around the midpoint of the nine or ten day backpacking Haute Route from Chamonix to Zermatt.  There are several ‘versions’ of the Haute Route (High Route in English). It started as a multi-day ski tour for Ski Mountaineers many years ago, and then a summer version for walkers was developed that worked its way around, rather than over, the ranges of mountains between Chamonix and Zermatt.  Then more recently Mountaineering versions have become popular. The Mountaineer’s version goes over a series of high Cols and takes in a summit or two along the way with nights in high mountain refuges. It’s more direct than the others and takes up to ten days, and there are several versions of it.

In 2005 I got as far as the Arolla valley – one valley short of Zermatt – before a stomach bug put paid to the last long climb over into the Zermatt valley. One of the high points came on Day 5. We spent the previous night in the Panossière Hut on the edge of the Corbassière Glacier. Setting out at six am on the fifth day we had a superb view up the glacier (still deep in shadow) to the Grand Combin, one of the giants of the European Alps.

This image was taken on my first digital camera – a little Sony compact. The file size of the images was less than a megabyte so they don’t enlarge brilliantly but it still give an idea of the sight that greeted us early that morning.

Hi - I'm a UK-based photographer who started out 45+ years ago as a lover of landscapes, inspired by my love of outdoor pursuits: skiing, walking and climbing. Now retired, I seldom leave home without a camera and I find images in unexpected places and from different genres. I work on the premise that Photography is Art and that creativity is dependent on the cultivation of 'A Seeing Eye'.
View all posts by LensScaper →
This entry was posted in Climb and Trek and tagged Corbassiere Glacier, Grand Combin, Haute Route, Panossiere Hut, Photography, Valais Alps. Bookmark the permalink.