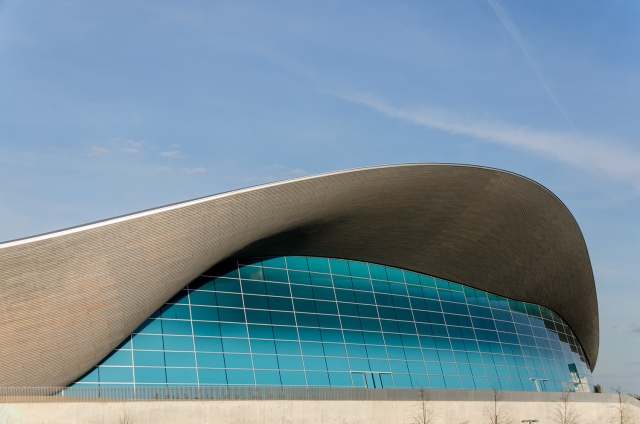 Her design for the Aquatics Centre in Olympic Park London was the star venue of the London Olympics in 2012. When I walked past this – and hurriedly shot this image –  on a visit to the Olympic Velodrome a week before she died, little did I realize the significance of this image.

Hadid’s designs were sometimes controversial, and always unconventional, featuring curvilinear or rectilinear lines that continually pushed the boundaries of construction. Her work spanned the world including designs for the Michigan State University Museum in the USA, the Maxxi Museum of 21st Century Art in Rome and projects in Asia including the Guangzhou Opera House in China. 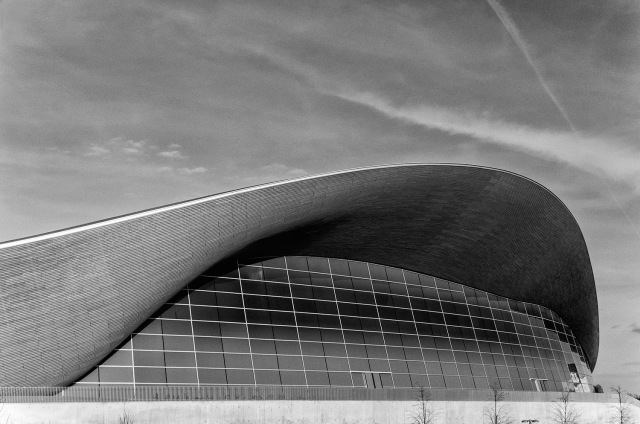 It’s been a troubling start to 2016. The obituary columns have made difficult reading with the names of men and women known the world over who are no longer with us. Nancy Reagan, David Bowie, Alan Rickman, Harper Lee, George Martin spring to mind; men and women that have contributed so much and have been fixtures in our lives. It’s only a few months since I re-read ‘To kill a mockingbird’.

In the UK we have lost, in rapid succession, a number of giants from the world of entertainment: Cilla Black, Terry Wogan, Paul Daniels and Ronnie Corbett. Stars that we were used to seeing on our TV screens, or listening to on the Radio, week after week.

I remember the day in 1963 that President Kennedy died. I was at Boarding School and I was doing what was called ‘Prep’ (Homework to most people) in the school library in absolute silence along with others. Philip Jones was listening to a transistor radio through an ear-piece – in contravention of school rules. Suddenly he said in a loud voice: ‘Kennedy’s been shot, he’s dead’. The room erupted into noise as school rules were completely forgotten by all including the invigilating Prefect.

I recall waking up on a Sunday morning, 31 August 1997, and half awake hearing a radio commentator referring to Diana, Princess of Wales in the past tense and initially thinking it was a grammatical error, and then within a sentence or two understanding that she was no longer with us.

And I recall earlier this year driving to London, again on a Sunday morning, and turning on the radio to discover Terry Wogan  – a colossus of Radio and TV – whose BBC Radio 2 Breakfast programme I listened to daily for many years  had died overnight. It was hard to drive as the tears repeatedly welled in my eyes as one by one colleagues paid tribute to Terry and music, that featured so regularly on his playlists, filled the car with sound.

With each death we lose a fragment of what life has meant to us. When my mother was getting old I remember her saying once: ‘we’ve lost another one’ – referring to another friend who had died. I understand what she meant.

Click on the images – to see an enlargement. I have solved the fault thanks to help provided by Linda of The Task at Hand. Thank you very much, Linda. I will explain the solution tomorrow.

Hi - I'm a UK-based photographer who started out 45+ years ago as a lover of landscapes, inspired by my love of outdoor pursuits: skiing, walking and climbing. Now retired, I seldom leave home without a camera and I find images in unexpected places and from different genres. I work on the premise that Photography is Art and that creativity is dependent on the cultivation of 'A Seeing Eye'.
View all posts by LensScaper →
This entry was posted in Architecture & Buildings and tagged Aquatics Centre, Architecture, London Olympics, Olympic Park, Photography, Zaha Hadid. Bookmark the permalink.