A Sea of Poppies and the Roll of Honour

There are many events taking place this year to commemorate the centenary of the start of World War 1. The Tower of London is the venue for two very special acts of commemoration that introduce a very personal element to the act of remembrance for all UK families who lost a family member in WW1.

Firstly, there is the installation titled: ‘Blood Swept Lands and Seas of Red’. 888,246 ceramic poppies have been progressively planted in the moat around the Tower since 5 August, the date war was declared, and more will follow in the coming weeks. 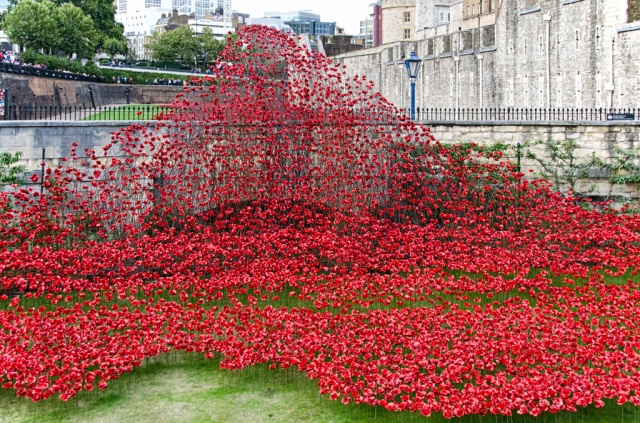 Each poppy represents a British Serviceman who lost his life in that war. There is an opportunity for anyone to purchase one of those poppies once the installation is removed later this year; all proceeds going to charity.

You will find full details of this act of commemoration on the Tower’s website. Click here for the direct link. 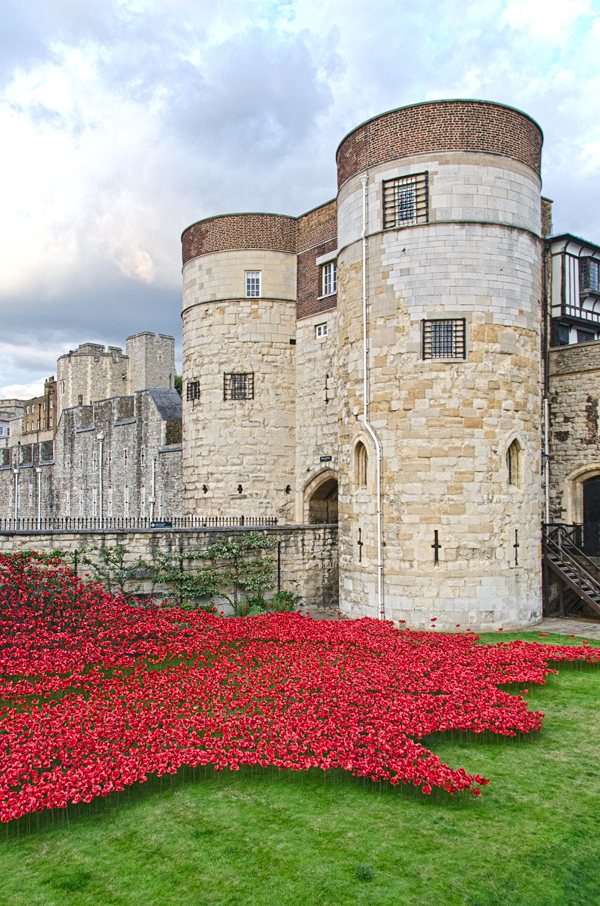 Secondly, each evening, at dusk a Roll of Honour is being read of names, nominated by families who lost a relative who fought for the Commonwealth forces. About 180 names are being read each night.

Last Sunday 24 August we were at the Tower to hear that particular Roll of Honour read, as it included the name of my wife’s Great Uncle: 2nd Lieutenant Basil Bentley who died in 1917. It was a very moving and poignant ceremony.

Basil Bentley was the youngest of five children born to George and Jane Bentley who lived in Darwen, Lancashire. The children were: Sarah, Philip, Agnes, Daniel, and Basil (the youngest of the five). Daniel died at age 1, the daughters – Sarah and Agnes – died of ill health in early adulthood.

Both Basil and Philip enlisted. Basil died. Philip survived. He married Elizabeth. They had four children: George, Jane, Mary and Basil. My wife (Charlotte) is the daughter of Mary.

2nd Lieutenant Basil Bentley graduated from Victoria University, Manchester with a BSC 1st class honours degree in Geology in 1915. He entered the Officers Training Corps in 1916 and was Gazetted in April 1917 joining the York and Lancashire Regiment. We assume he went to northern France soon after. He was killed on 11 September 1917 aged 23. He is buried in the Favreuil British Cemetery near Bapaume in northern France.

Those are the bare facts, but to the Bentley family they were a very personal tragedy. It’s difficult for us to imagine how a family can cope with the loss of not just one but the loss of four out of five of its children. 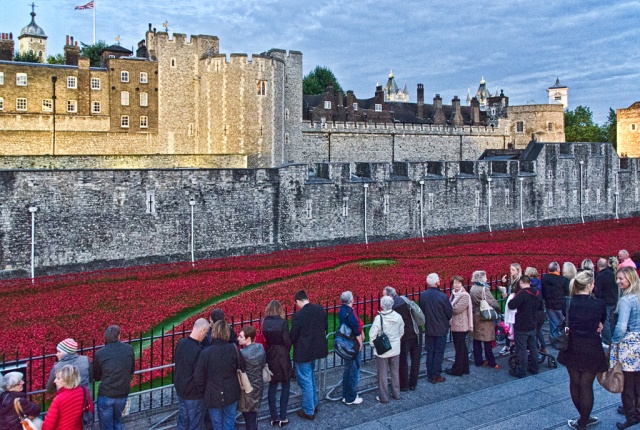 To stand on the terracing of the Tower last Sunday with our son, as the light drained from the sky, was a very poignant moment. Over the course of an hour or so, a crowd had gathered. Some were perhaps just curious tourists, but the majority I am sure were there for the same reason as we were. Several clutched a print-out of the Roll that was to be read. 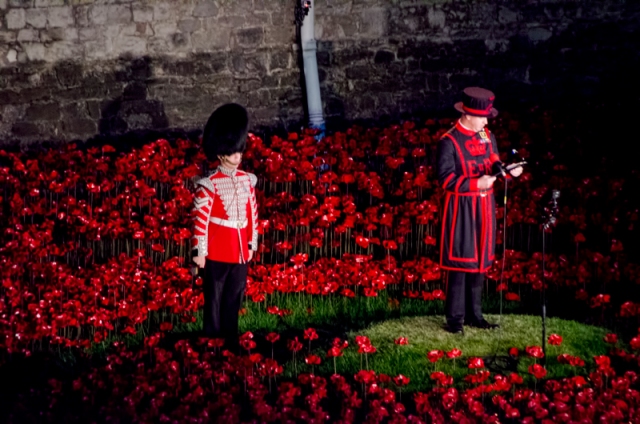 It was nearly dark at 20:40 when a Yeoman Warder (Beefeater) of the Tower accompanied by an army bugler marched out to a slightly raised green mount within a sea of poppies and stood in the spotlight. The Roll of Honour was read, clearly and audibly. 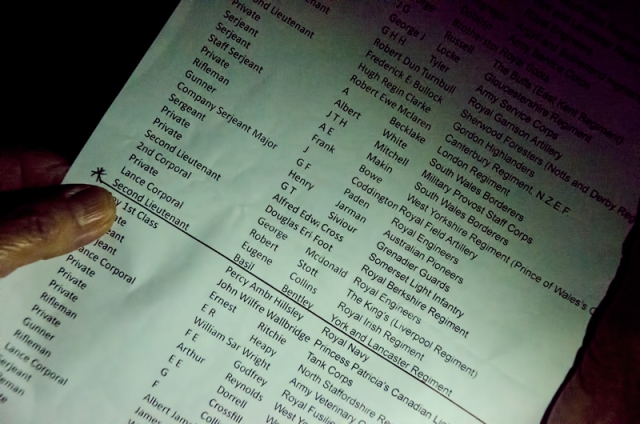 At the end of the list of names, the Yeoman recited the famous lines from the ‘Ode of Remembrance’, part of Lawrence Binyon’s poem ‘For the Fallen’:

They shall grow not old, as we that are left grow old:

Age shall not weary them, nor the years condemn.

At the going down of the sun and in the morning,

We will remember them

And then The Last Post was played by the Bugler. 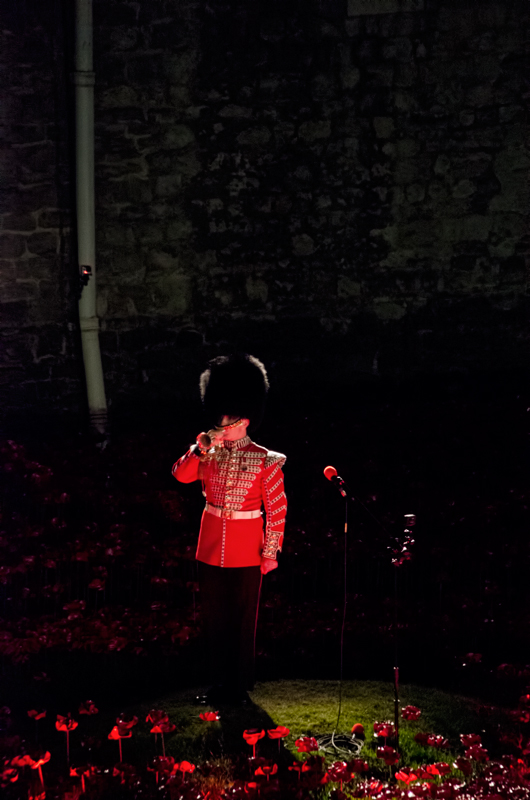 Mere words cannot describe how it felt to be there on that evening. But it’s enough to say that we were there, representatives of a current generation, to give thanks and to remember the sacrifices made by a whole generation of men one hundred years ago.

If you have an opportunity, I urge you to consider visiting the Tower in the next two months. I hope to return to do fuller justice to the sea of red that is encircling the Tower. And if someone from your family died in that Great War, then consider making a nomination and make your visit more personal. 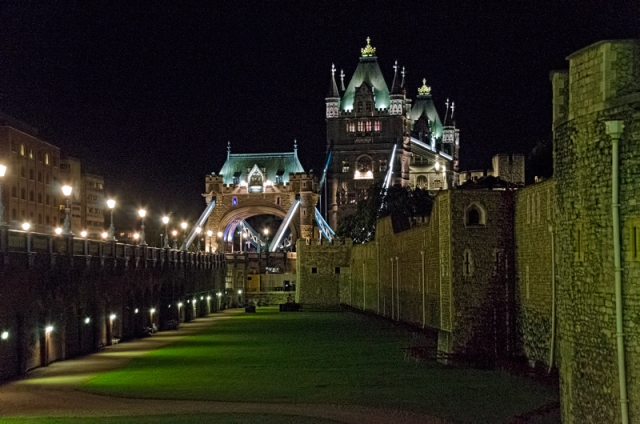 This Post would not have been possible without information and help from Charlotte (my wife) and her Cousin (Julie Turner) to whom go my very grateful thanks.

For the technically minded this was not easy to photograph. I was using a long lens at a very high ISO. All images were hand-held, at up to 375mm in some instances. Processed in Photoshop and Topaz De-Noise.

A full gallery of images follows. Click on the first image and then navigate through. 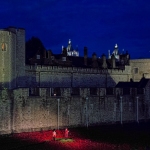 Hi - I'm a UK-based photographer who started out 45+ years ago as a lover of landscapes, inspired by my love of outdoor pursuits: skiing, walking and climbing. Now retired, I seldom leave home without a camera and I find images in unexpected places and from different genres. I work on the premise that Photography is Art and that creativity is dependent on the cultivation of 'A Seeing Eye'.
View all posts by LensScaper →
This entry was posted in A Personal Viewpoint, After Dark and tagged Blood swept lands and seas of red, Commemoration of WW1, Photography, Poppies, Poppies at the Tower, Roll of Honour, Tower of London. Bookmark the permalink.