The weather where I live in the UK has been pretty cold for the last few days – sharp overnight frosts, cloudless skies during the days, and some beautiful sunsets (click here for images of the best one); all thanks to high pressure. Cold weather like this brings out the hibernating instincts in me, but also the desire to get out there and capture something.

So we went for a walk last weekend at Willen Lake – actually a pair of lakes (20 mins drive from home) joined by a narrow channel where a main arterial road flies over. It was mid-afternoon, the sun was low in the sky, and so thinking ‘image possibility’ we elected to walk down the E side so that the setting sun would, with a bit of luck, throw a trail of light across the water – which it did. But also, for the third time in two weeks, I found and came home with the unexpected. 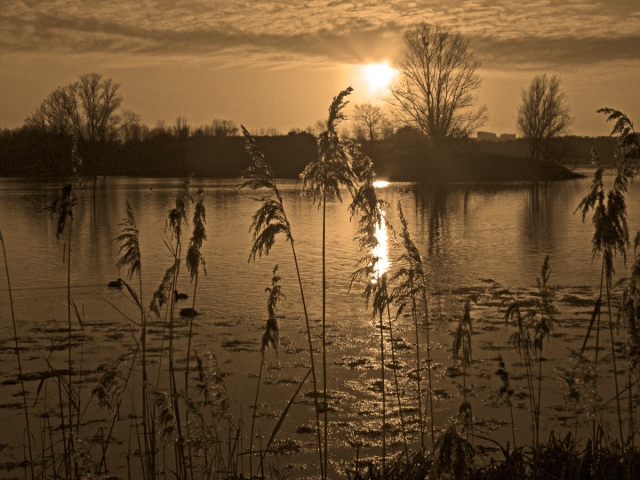 I’ve converted this shot to B&W and then added a sepia tone largely because there was some rather distracting flare around the sun that really didn’t suit the original. The background wasn’t that exciting (it isn’t at Willen) so the foreground needed to provide the interest. It’s an OK shot, but not exactly riveting.

A little further on, there’s a stretch of walling: all part of flood protection, with associated overflow drainage channels. And there on the wall was a Graffiti signature and as I looked at it, I realized that my shadow was part of the picture. Bingo! Quirky image. 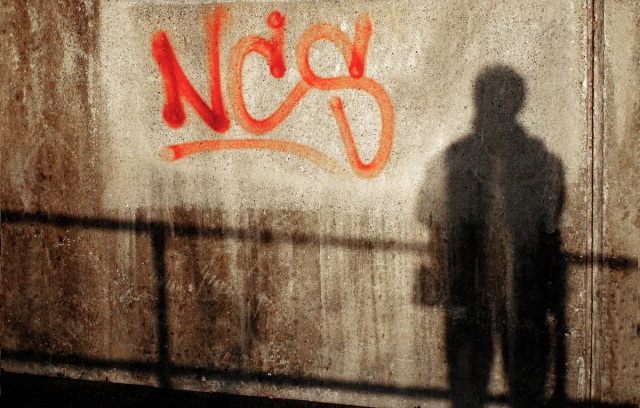 Further on, the retaining wall of a drainage ditch towered high above the lake and warm light was bouncing off the wall, throwing precise reflections of a tree and railings into the perfectly calm water. This looked interesting – another image(s). Back home I looked at the originals and thought, there’s an image here if I work at it. After a number of approaches, here’s the final version that I’ve come up with so far. 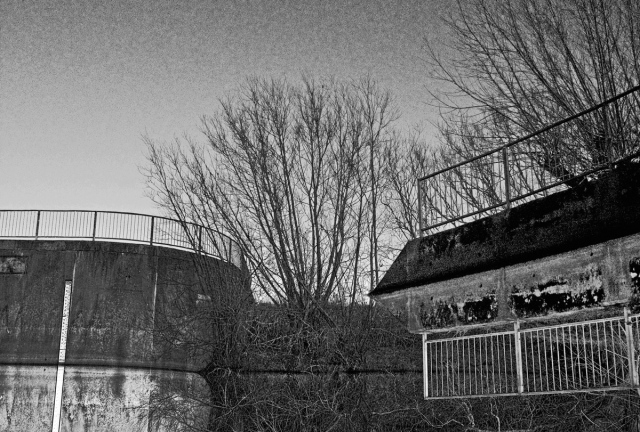 I vertically flipped the original, converted it to B&W and added grain and a bit of poster edge. I’m not convinced I like it….but I’ve got something gritty and a bit different out of the original! But I’ve given up trying to title it!

We reached the flyover and right there on one of the overhead road’s supporting pillars was a new wall painting that really stopped me in my tracks.

As well as being a striking and superbly executed piece of Art this is so apt in these surroundings. I was quite stunned. Brilliant light was streaming between the pillars causing problems with the exposure. For once I thought – HDR would be handy here. But I’ve never tried it and so I fired off a series of exposures with fill in flash searching for the optimal single exposure. Back home, I broke the best image down into a series of selections, processing each one individually. Finally a bit of cloning helped to minimize the blown highlights between the pillars. Job done. The painting is titled ‘Hope is on the Horizon’ in the bottom left corner, and the Artist is someone called Hek but who he is exactly I have no idea – but as always it’s nice to bring work like this to a wider public – Because this is exciting work that deserves exposure.

We were getting cold by then and the sun was dipping, and so it was time to turn round and retrace out steps. 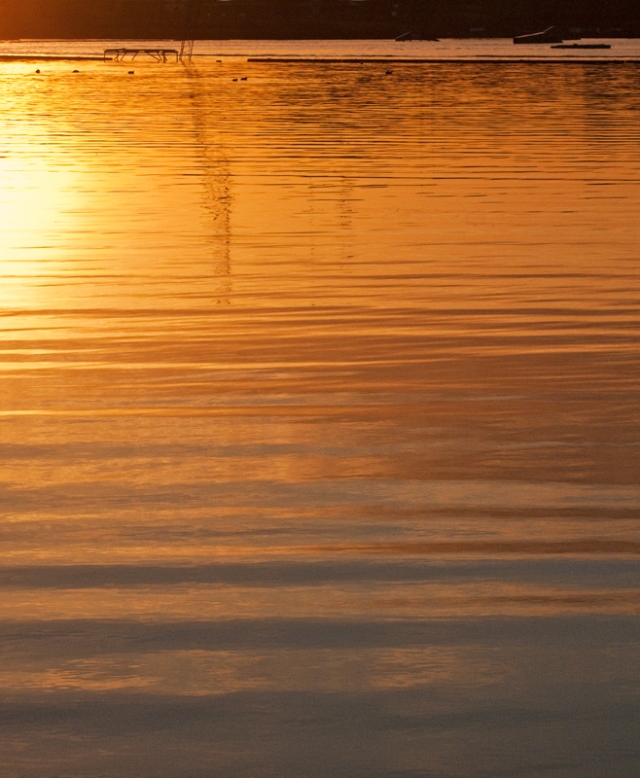 Time for one final shot, as the sun set, of a light trail thrown across the water. A fitting end to an interesting 40 minutes.

I’m reminded of the Tom Hanks quote from Forrest Gump: My momma always said “Life was like a box of chocolates….you never know what you’re gonna get.”

Photography is like that box of chocolates – expect the unexpected!

Hi - I'm a UK-based photographer who started out 45+ years ago as a lover of landscapes, inspired by my love of outdoor pursuits: skiing, walking and climbing. Now retired, I seldom leave home without a camera and I find images in unexpected places and from different genres. I work on the premise that Photography is Art and that creativity is dependent on the cultivation of 'A Seeing Eye'.
View all posts by LensScaper →
This entry was posted in Milton Keynes, Street Art, Sunrise and Sunset and tagged Graffiti, Milton Keynes, Sunset, Wall Painting, Willen Lake. Bookmark the permalink.

10 Responses to A Lakeside Walk