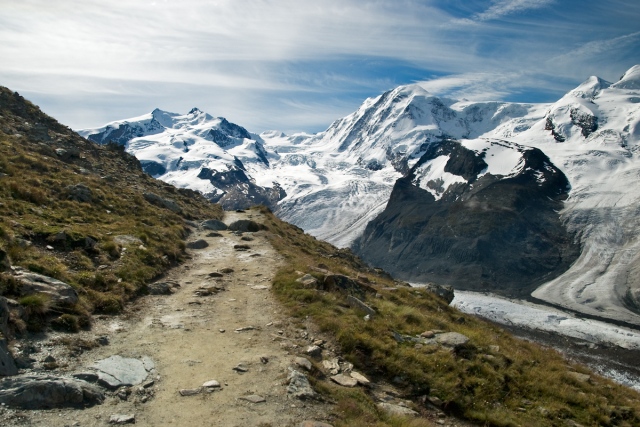 We’re back in the Swiss Alps – Zermatt – to be precise, for today’s post about the trail to the new Monte Rosa Hut that opened in March 2010, and which I visited earlier this summer.

The original Monte Rosa Hut was built in 1895. It has now been completely replaced by a futuristic, hi-tech, environmentally friendly, award winning structure of wood on stainless steel foundations, clad in aluminium and glass that caters for 120 guests. From Gornergrat it is a tiny speck in the distance – highlighted in image (Lt)

Through a long lens (450mm – film) it looks like an alien object, but up close its true beauty is revealed. (Click images to enlarge).

The new Hut is sited slightly higher (2883M) than the old hut, now demolished. All materials, prefabricated elements and workers were ferried to the site by helicopter: requiring 3000 trips in total. The hut opened in March 2010.

The hut is used by climbers, ski tourers and ski mountaineers heading to the summits of Monte Rosa. It’s a huge mountain with ten distinct summits over 4000M. The highest being the Dufourspitze: also the highest summit in Switzerland and the second highest in the Alps.

The hut trail is about 6Kms long and takes 2.5-3hrs. It starts from Rotenboden (2815M) on the Gornergrat cog railway. The first half is a downhill path towards the Gorner glacier at about 2500M before regaining the lost altitude to reach the hut at 2883M 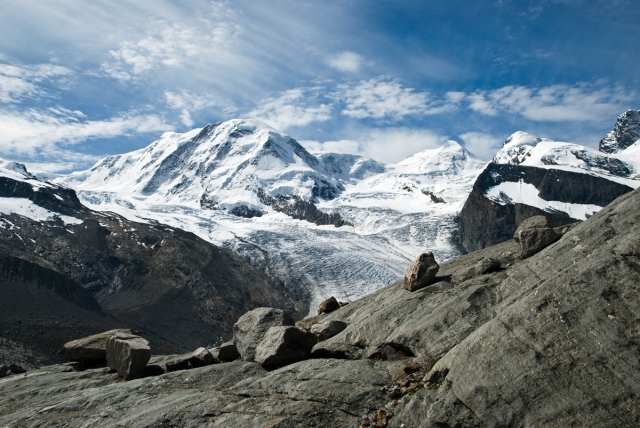 Liskamm from descent to the Gorner Glacier - click to enlarge

The descent down the lateral moraine onto the glacier itself  has always been problematic but due to glacier shrinkage now involves a steep drop employing two ladders.

The glacier at this point is chaotic and ruckled – the route in fact crosses the junction of the Gorner and Grenz glaciers together with a central moraine ridge. The route is marked by a series of flags. The glacier in summer is dry (meaning there should be no lying snow on the ice) but crampons are advisable.

The 1200ft climb up to the hut is steep in places but the views over the upper Grenz glacier to Lyskamm and Caston and Pollux are magnificent.

The hut finally comes into view and the effort is rewarded. In my opinion, it’s a stunning building that justifies all the praise that has been lavished on it. 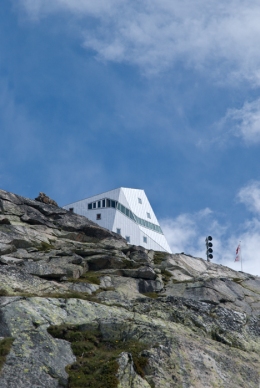 The futuristic Aluminium and Glass exterior - click to enlarge

The interior is equally impressive.

All that remains is the journey back to Rotenboden – allow another 3hrs for this.  If you are a fit walker, don’t mind heights and ladders, and have some experience of wearing crampons then this walk is a must for visitors to Zermatt. Do it on a good day and give yourself plenty of time.

A note about Huts for those unfamiliar with Alpine Mountaineering:-

Ascents of the majority of 4000 metre peaks in the Alps are two-day climbs: Day 1 is the walk up to the Hut (Refuge in French, Hutte in Swiss German) sited at about 2700-3000M. Day 2 is the summit climb, commencing as early as 2am and the descent back down to the valley. Access to the Huts is often via straightforward but steep walks (anything up to 5hrs walking), but a few involve sections of Via Ferrata – scrambles up rock steps protected by cable, piton or ladder – and some involve glacier crossings. Most huts were built a hundred or more years ago with the surge in interest in climbing – they offered shelter, simple dormitory accommodation and a place for climbers to cook/prepare food. Progressively through the 20th century, huts underwent improvements – a resident warden, a cooked evening meal and improvements in accommodation. They also started to cater for the more adventurous day-tripper by offering food and drinks during the day. More recently many huts have been modernized further and others completely rebuilt – now offering hot showers, plumbed in toilets and excellent food.

Hi - I'm a UK-based photographer who started out 45+ years ago as a lover of landscapes, inspired by my love of outdoor pursuits: skiing, walking and climbing. Now retired, I seldom leave home without a camera and I find images in unexpected places and from different genres. I work on the premise that Photography is Art and that creativity is dependent on the cultivation of 'A Seeing Eye'.
View all posts by LensScaper →
This entry was posted in Climb and Trek, MountainScape, Swiss Alps - Summer, Walking in the Alps and tagged Alps, Castor, Dufourspitze, Gorner Glacier, Grenz Glacier, Liskamm, Monte Rosa, Mountain, New Monte Rosa Hut, Pollux, Rotenboden, Swiss Alps - Summer, Valais, Walking in the Alps, Zermatt. Bookmark the permalink.