Black Snow?! Snow should be glistening white – shouldn’t it? And that was the dilemma with this image.

Last winter, skiing in Zermatt, I decided to try my hand at some Action shots of skiers and boarders using a 28-300mm Sigma Zoom. It’s a compact lens thankfully – skiing (with care) with up to a  £1000 of gear round one’s neck isn’t something I do often! A fall could be rather expensive!

Most of the shots I took were in bright sunlight, and for many I was shooting towards the light – that way I was getting some great sun-lit plumes as skiers/boarders executed their turns. See image lower down.

Late in the afternoon, the sun was low in the sky. I dropped over a ridge, and the snow slope beyond was in deep shadow, so I parked at the side of the piste just at the edge of the shadow. Looking back up there was an arc of brilliant light just where the sun had set below the ridge.  I shot a set of images as skiers and boarders came into view in this arc of light. Conveniently too – in my opinion – the arm of an artificial snow blower featured in the shot, assisting the composition.  The image at the top of this post was the best of the bunch, with a backlit snow plume.

With such a strong light, I knew the snow was going to be hopelessly underexposed, if I wasn’t going to burn out the highlights totally. In the original RAW image it actually looked a dark muddy grey-blue. So I went for broke and changed the levels and rendered the snow black and the result is simply a silhouette.

It’s different. I like it. What do you think?And here’s something approaching a normal action shot on the piste. 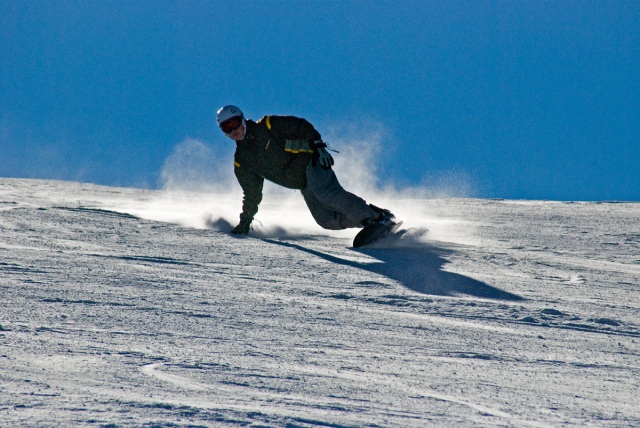 For more Ski images go to the gallery on LensScapes. Click here.

Hi - I'm a UK-based photographer who started out 45+ years ago as a lover of landscapes, inspired by my love of outdoor pursuits: skiing, walking and climbing. Now retired, I seldom leave home without a camera and I find images in unexpected places and from different genres. I work on the premise that Photography is Art and that creativity is dependent on the cultivation of 'A Seeing Eye'.
View all posts by LensScaper →
This entry was posted in Skiing - General and tagged Action, Backlit, Piste, Silhouette, Ski, skiing, Snowboarder, Snowboarding, Zermatt. Bookmark the permalink.